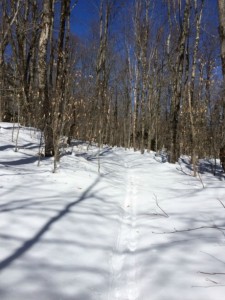 As Vermont’s ski areas morphed into Destination Resorts, I gave up downhill skiing for cross-country; as cross-country skiing developed around groomed trails at Nordic ski centers, I stepped out of the tracks and went backcountry skiing.

The Green Mountain National Forest is just twenty-five miles from my home. Despite the sunshine and the late March date, winter conditions prevailed with a temperature of twelve degrees and a stiff, bitter wind earlier this week. We stayed warm with layers of fleece and movement; we were enchanted by the beauty and solitude. It was just the two of us – and the dog.

We snapped on our skis and started down a snow mobile trail, but within minutes we slid off the packed thoroughfare into a narrow river valley open wide to the sky. 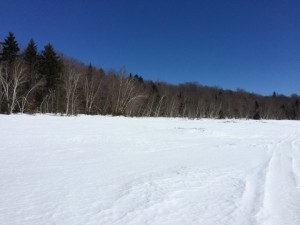 The landscape is one of spare beauty; the snow sculpted by wind; fierce sunlight ricochets off the snow covered ground.

The river plays hide-and-seek through the dense snow pack. We followed it south, making our own path. At times, we’re forced to bushwhack our way through pucker brush and pick our way through the trees. Between a crude map, a good sense of direction, and dead reckoning, we aimed to venture forth – and still find our way home.

Coming out here was my idea, but I wouldn’t do it without my husband, who grew up in New Hampshire and is literate in the landscape of nature. It’s only now, after thirty-odd years in Vermont, that I’m finally ready to learn this language of wilderness. Up until now, I’ve stuck to blazed trails.

There are no blazes here. I’m out of my element, and my anxiety rises, even as I urge myself on. The river we follow leads us to Somerset Reservoir, the wildest recreational body of water in Vermont. This day, it’s solid ice. Even as I’m admiring the stark monochromatic landscape, what I see is a desolate artic expanse and think of Ernest Shackleton, the famous polar explorer, whose ship Endeavor became stuck in the ice. Instead of retelling myself that tale of endurance, I force myself to think through what I’d do if one of us fell and became injured. Would I find the Catamount Trail on the far side of the lake, or would I battle my way upwind, retracing my steps? Would I have Shackleton’s courage and make it t safety in time to get help? 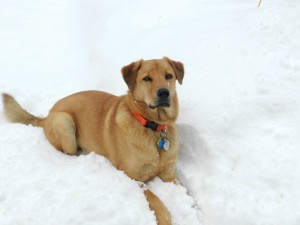 I talked my way through survival tactics until I saw my husband far, far ahead, trailed by the dog, putting me in mind of Mary Shelly’s famous novel, which opens with Dr. Frankenstein chasing his monster by dog sled across the artic ice. Amused by my own ridiculousness, I decide the best way to banish fear is to ski harder.

When I caught up to Tim, we stopped for lunch in the lee of an island, out of the wind. The more extreme the conditions, the better peanut butter and jelly tastes.

With calories to burn, we followed the shoreline to the northeast corner of the lake and – to my amazement and relief – found the blue paw-printed blazes that mark the Catamount Trail. 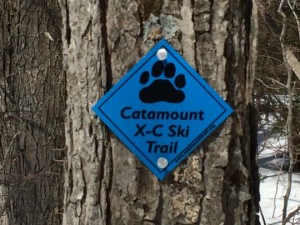 There was no evidence of anyone having passed by this way recently, so we had to break trail. Nevertheless, the regularly spaced blue blazes banished my fears of misadventure. True to my urban upbringing, I was comforted by this woodland equivalent of traffic signs; I relaxed and enjoyed skiing deep in the woods. 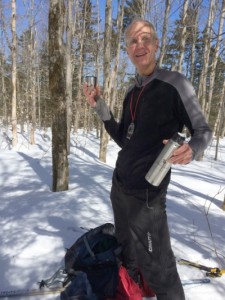 We skied for miles through birch, then hemlock, on gently rolling terrain. Where trails intersected, there were lonely signposts. We stopped at one and opened the thermos of sweet, lemon tea. In the forest, we were out of the wind and warm enough to shed neck warmers, outer layers, even our hats.

After nearly four hours of skiing, we circled back onto the main snow mobile track. Tired, sore, and utterly restored by a day spent alone in nature, we climbed into the car and returned to the paved road of our lives.