Vermont is a place of many seasons, and one of my favorites is Sugaring, when maple sap is harvested and boiled down to syrup. Sugaring season falls somewhere between winter and mud season – another of Vermont’s many seasons, and another precursor to Vermont’s long, slow, spring.

Sugaring season occurs when the daytime temperature rise above freezing and fall again at night. This fluctuation in temperature forces sap to rise into the maples, where it’s harvested with hard labor and sweet results. 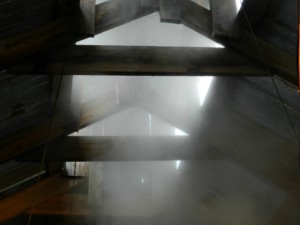 Every year I visit a friend’s sugarhouse, when the sweet steam of boiling sap signals the arrival of early spring. These are always chatty, social visits, a time to catch up on the winter’s news even as Charlie stokes the fire, checks the sap level in the back pan and keeps an eye on the syrup in the front of the evaporator. 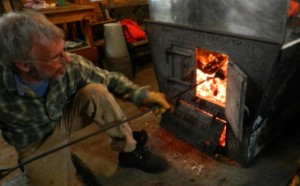 Occasionally, I’ll help sling wood into the sugarhouse or even help fire the arch, but always as an on-looker. I was never fully involved in sugarmaking – until one of my daughters dated a farmer whose family operates a sugaring operation, and I was invited to help out.

We arrived on a Saturday afternoon, when friends and family with off-farm jobs were boiling sap 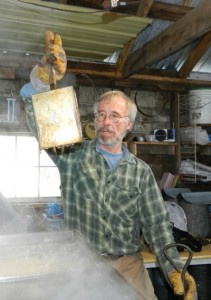 from the main line – three miles of plastic tubing that drains sap from about 800 trees directly into the holding tank that feeds the two, giant, evaporators.

As the newbie, I was assigned to collecting sap from buckets on a distant patch of the 200-acre farm. A tractor pulling the gathering tank struggled up the muddy woods road while four of us spread out through the trees.

At first, the enterprise seemed like a treasure hunt, and I was delighted each time I discovered a bucket brimming with sap. But the tank slowly filled with the same steadiness that my arms began to ache, and it wasn’t long before I greeted each full bucket with a small, inward, groan.

I was relieved when we arrived at a hillside threaded with tubing that carried sap directly from the trees into a galvanized tank, which we emptied by bucket brigade. The experienced sugar makers were happy about the early switch Daylight Savings Time that allowed us to return to the sugar house in the long afternoon light; I was grateful for the momentary rest.

Back at the sugarhouse, people were working like stevedores, hefting four-foot lengths of oak into the firebox of the giant evaporator, keeping the fire even and hot. 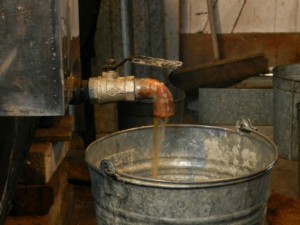 While the brawny youth stoked the fire, I helped prepare a pancake and sausage supper on a wood stove in the sugarhouse. We doused our dinners with syrup straight from the pan. It was a festive meal laced with continual work. We boiled till midnight, then fell into bed.

Overnight, the weather changed, and the sap slowed. Even though there was little sap in the buckets, we still had to empty them, so that it didn’t sour. This chore involved visiting every tree and emptying every bucket, regardless how little sap it contained.

Back at the sugarhouse, we again boiled till midnight. Then the predicted freeze arrived, locking the sap in the ground.

We were hardly idle while we waited for a thaw. There’s always something to do on the farm, even if it’s “only” the daily round of animal chores. 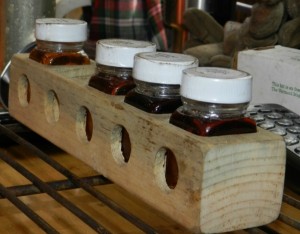 I had to return to work before the weather changed, but that farm visit changed my understanding of maple syrup, which tastes even sweeter, now that I know just how much labor it takes to gather the sweet sap of spring.

Deborah Lee Luskin is an author, blogger and pen-for-hire. A slightly different version of this essay was broadcast on the stations of Vermont Public Radio in 2009.