The average age at our Thanksgiving table plummeted from 73 last year to 29 this. That’s a whopping drop of forty-four years – an entire generation, and then some.

We had seventeen guests both years, though obviously not the same ones.

Last year, my then ninety-two year old father was still with us. This was my first Thanksgiving without Dad, enveloping me in a mourning fog as slick as spilled gravy. And when my octogenarian aunt and uncle cancelled at the last minute, I slipped into grief’s cousin: self-pity.

For the first time, I represented the grandparent generation – even though I don’t have any grandkids of my own. Fortunately, we’d already invited two two-year olds who contributed mightily to both the fun and the din.

Nate, my cousins’ two-year old, arrived with a mouthful of words like “washing machine,” “toaster,” “dining room light,” and “furnace” (for the wood stove). When he spied the ceiling fan, we had to turn it on for a spin.

Delilah, a few months older than Nate, is a favorite neighbor whose mother was heavily pregnant with her second child. Juliette was in no condition to prepare a feast: Her mother died eighteen months ago and her in-laws live far away. In early November, I invited her family to join us. Tim and I have a holiday tradition of crowding our table with family and friends.

“Can my father come, too?” she asked.

At the time of the invitation, I didn’t expect Papa Bob to be the only guest representing the generation of elders. In the hubbub of arriving guests, introductions, and pouring drinks, I pulled him aside. “Do you mind telling me how old you are?” I asked.

“I just wanted to know who’d be the oldest at table. I’m pretty sure you’re it.”

What could he do but take another pull on his Scotch?

But that’s not why I invited Juliette’s family to Thanksgiving. I was re-gifting a kindness I’d received twenty-seven years earlier, when I gave birth just days before Thanksgiving. Older friends invited our little family to their Thanksgiving table. Bunny and Jack became the kids’ local grandparents. As they aged, we reversed our roles, and they came to our house to feast. With them around, I felt secure in my relative youth.

Not so this year. At seventy-four, I thought Papa Bob well within the reaches of middle age and those of us in our early sixties fairly young to represent the family elders.

A Candle of  Remembrance

When we sat down to dinner, Tim and I shared the piano bench at the head of the table. Next to us were the two toddlers in their high chairs; their four parents, all in their thirties; and Bob, our sole grandparent. Beyond them were two teens and five adults in their twenties.

The woman at the foot of the table was 29, the average age of us all. As she lit a candle in remembrance of my father, I had two thoughts: 1) that I was looking at the horizon of a rising generation of smart, passionate people engaged in work to improve the human condition in a myriad of ways, including in education and the arts; and 2) if I’m lucky, one day, when my sun dips below the horizon, these same people will light a candle for me. 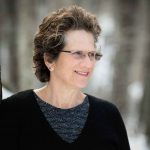