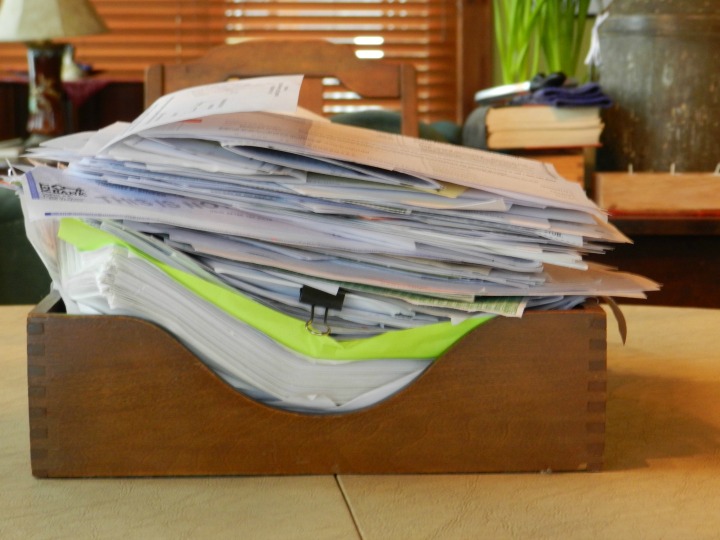 Living in Place allows me to collect and store every scrap of paper that comes through my door. No matter how much junk mail I recycle at the PO or how many bills I pay on-line, papers still seep into the house and pile up on my desk like so much silt after a storm.

The truth is, I like paper – up to a point. As a solo entrepreneur, I’m required to do a fair bit of bookkeeping for the IRS, which means preserving documentation so I can prove my income and expenses. Despite annual resolutions to file receipts as soon as I pay the bills, the papers pile up for months at a time. Twelve of them, to be exact.

For years, I despaired over the fluvial fans of receipts on my desk, though not enough to do anything about them until the end of the year. Now, I deliberately save the year’s filing, so I can celebrate Boxing Day, an obscure British holiday that originated back when employers gave their servants a box of gifts the day after Christmas. These days, December twenty-sixth is a bank holiday in the parts of the world that were once Imperial Britain.

But I live in southern Vermont. And at my house, Boxing Day is the day I put the year in a box. 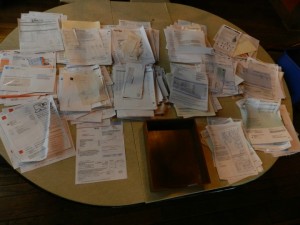 I start by clearing the dining room table, where I sort the year’s receipts.

In addition to creating order from chaos, this exercise is a bit like an archeological dig, affording me a chance to rediscover events I’d already forgotten. After vowing not to raise meat birds back in the spring, I’m reminded of my change of plans when I find the packing slip for two-dozen chicks that arrived in September. 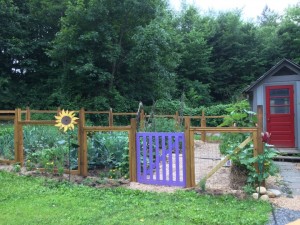 A bill for lumber reminds me of the fence we built to control our gardening ambitions, and how highly successful we were in maintaining a modest-sized, highly productive vegetable patch. 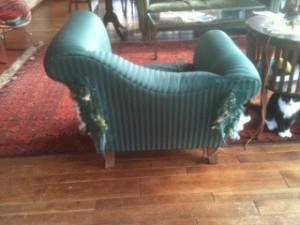 Among the receipts for March is one for new upholstery. I’d already become so accustomed to the renewed furniture that I’d forgotten how the resident felines had torn it to shreds. Briefly after the chairs were restored, we kept the beasts off by misting them with water. But our cats are more persistent than their humans, and they are back in possession of the most comfortable seats in the house.

There’s no reason to keep this receipt, but I do. I’m more successful winnowing receipts for trivial purchases, which I toss in the hopper to be shredded. Shredded papers become bedding for the laying flock; we then use the manure-rich bedding to fertilize the garden in the spring. 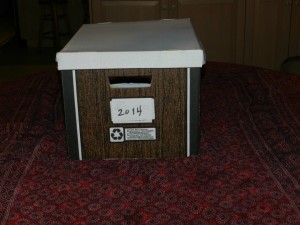 The papers worth saving, I file in folders and place in a banker’s box.By the time the sun sets on Boxing Day in my part of the world, I’ve got the year sorted, labeled and boxed.