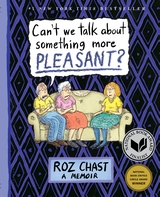 Can’t We Talk About Something More Pleasant is New Yorker cartoonist Roz Chast’s graphic memoir about caring for her elderly parents as they resisted the help that they needed and that their middle-aged daughter was at initially clueless to provide.

Providing that care requires some tricky role-reversal, and Chast has a hard time convincing her parents to accept change willingly. But change crashes down on Elizabeth Chast when she falls from a ladder she shouldn’t have been climbing in the first place, and to George, who forgets how to find his way home. It falls to Roz, an only child, first to attempt avoiding the inevitable pitfalls of frail ninety-somethings trying to maintain their independence in a home that’s become unsafe, and then picking up the pieces after the inevitable catastrophes. I know. Been there; done that.

So it was fun – and funny – to read about someone else’s story, especially one told with humor. It’s often hard to laugh as this particular drama takes place. Baby Boomers – spawned by the Greatest Generation – are now trying to figure out how to care for parents who were raised during the Great Depression, came of age during World War Two, and who are now living well into their nineties with sagging bodies and softening minds. Generally, they don’t accept help.

A DRAWER FULL OF JAR LIDS

But there was one particular frame in the book which rankled. Instead of drawing the remarkable clutter that accumulated in a small apartment over a very long period of time, Chast photographed it, providing documentary proof of the colossal mess. One caption read, “Why was there a drawer full of jar lids?” next to a photo of the same.

I, too, have a drawer full of lids.

As the New England saying goes, If it ain’t broke, don’t fix it, and if it is broke, don’t throw it out. So some of my lids may – or may not – fit the wide assortment of glass jars in which I store grains and cereals, pickles jams, stones from the river, and coins that come loose in the wash.

STRING TOO SHORT TO BE SAVED

I cleaned out my parents’ houses the three times they downsized and my father’s last home for the last time, last month. I found countless collections of broken pencils, pens that had run out of ink, single socks, and a random collection of greeting cards never sent. 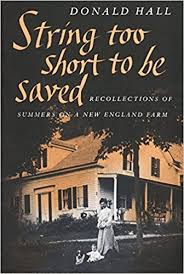 All this stuff reminds me of Donald Hall’s poignant collection of essays whose title comes from a box full of String Too Short To Be Saved that he found in the attic of his grandparents’ farm after they died.

When I look around my house, I think the jar lids are the least of the stuff I’ve got stashed away in forgotten drawers and boxes, to say nothing of the clutter in the attic and the junk in the basement, both full.

Holding on to things is a drawback to living in place for so long. But when I think about what all this stuff represents to my children if they end up having to clean out this house, I’m motivated to get a head start.

Now that I don’t have any elderly parents to boss around, I best become my own boss and clean up my house.

THE GIFT OF A CLEAR ADVANCE DIRECTIVE

Meanwhile, I am incredibly grateful to my father for the clarity of his Advance Directive and his wishes about dying. You can listen to that story, broadcast on the stations of Vermont Public Radio, here.

While having the conversations about end-of-life issues can be unpleasant, they can also bring clarity and unity around the inevitability of death. If you haven’t had this conversation or written your Advance Directive for Health Care, I highly recommend that you do. And reading Chast’s memoir, Can’t We Talk About Something More Pleasant? is a good way to start talking.

DISCUSS CAN’T WE TALK ABOUT SOMETHING MORE PLEASANT WITH ME

The Rockingham Free Public Library and Brattleboro Area Hospice are sponsoring a book Discussion about Can’t We Talk About Something More Pleasant? by Roz Chast on Monday, September 24 at 5:30 PM. I’ll be facilitating the discussion.

The Rockingham Free Public Library, 65 Westminster Street, in Bellows Falls. Books are available on loan at RFPL. The program is free, open to the public, and accessible to people with disabilities. For more information, contact the library at reference@rockinghamlibrary.org or 802/463-4270. Sponsored by the Vermont Humanities Council under a grant from the National Endowment for the Humanities.

Hope to see some of you there – and all of you here again next week. Don’t forget to subscribe to have these essays emailed to you almost every Wednesday.