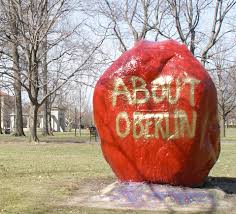 For thirty-nine years, I didn’t attend a college reunion, and then last weekend, I did.

I went because I promised my college housemates I would go, so I kept my word and went. The irony is: no one from this cohort attended, though the one who lives nearby drove down for a wonderful visit.

I was ambivalent about going: it meant four days away from home, two of them spent in the car. Even in a hybrid, that’s a lot of carbon spewed into the atmosphere just to indulge in nostalgia.

“Nostalgia,” I just read in someone else’s essay, “fuels our resentment toward change.”

I like that I’m not the eighteen year old who arrived in Oberlin, Ohio, on a hot day in 1974, nor the 22-year old who graduated on an even hotter day in 1978. I don’t do well in the heat, which may be one of the reasons I live so happily in Vermont.

Another is that Vermont seemed like Oberlin for grown-ups: a place of fierce individualism within tight community, a place of natural beauty, casual dress, homegrown food and liberal politics. A place with lots of music.

But the Oberlin I arrived to late Friday afternoon was almost unrecognizably upscale. It’s hipster cool; Vermont’s more aging hippies. Happily, good coffee is now a staple in both places. Change is good.

When I attended Oberlin, new trees had recently been planted to replace dead elms. Now, benches sit beneath stately trees, inviting rest in deep shade. This landscape differs notably from the sunbaked hard-pack that passed for grass on which we sprawled back then.

As I said, change is good.

I walked around, admiring renovated old buildings and tastefully designed new ones, and I visited Mudd Learning Center, the library that opened the year I arrived on campus. Mine is the first class never to have studied at Carnegie, something older students always rubbed in. They didn’t like Mudd, or maybe they didn’t like change, or both.

I loved Mudd, and I spent a lot of time in there. My senior year, I even had a study carrel: Number 222. This was the first of a series of small rooms I’ve written in, the beginning of a trend. I had another carrel at Baker Library when I was at Columbia; a stone cottage on a moor in Northumberland when I lived in England, and a small cabin when I first came to Vermont. Now I write in an 8×10 custom-built studio, the best yet.

Mudd Learning Center has changed since it first opened: the card catalog is gone, the reserve reading room no longer exists, and the enormous, air-conditioned room which housed the then state-of-the-art Sigma-9 main-frame computer, has been converted into what appears to be a computer museum. It was closed, but I peered through the glass door to see every model of Apple computer I’ve ever owned, beginning with my very first: a Macintosh 512 from 1984.

The digital clocks that used to click every time a number flapped over have all been replaced by silent analogs, and the periodical reading room is now a café. But upstairs, the moon chairs are still there, and back in the stacks, that unmistakable aroma of books. Some things never change, and that’s good, too.

I did meet up with some classmates I hadn’t seen in most of forty years, and I met other classmates I never knew. I dined with one former professor who is no longer so much older than me. It was good to catch up.

Even the drive was better than bearable; it was fun. I drove with Suzy (class of ’77) whose husband (Walter, ’78) like mine (Tim, ’77) stayed home. They both knew each other at Oberlin, where they ran cross country.

I knew Walter better than Suzy back in the day. I didn’t know Tim at all, nor did Suzy know Walter. But having college in common has made for two long-lasting marriages and a growing friendship between the two couples.  Every time we get together for dinner, it’s like a college reunion. But we don’t just reminisce about the past. We’re part of each other’s present lives as well.

I enjoyed taking a trip down memory lane over the weekend. I enjoyed the glimpse of my long-ago self. But I don’t want to dwell there. I’ve changed, and so has the school: Buildings, personnel, even knowledge.

I’m glad I kept my word. And I’m ever so glad to be home again, living in place.