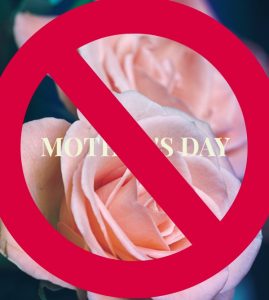 I love being a mother, and I hate Mother’s Day

While I was pregnant with our first child, friends, family and strangers assured me I could write while the baby slept.  And I believed them.  After all, I’d already navigated graduate school and wrote a dissertation while teaching.  How hard could motherhood be after that?

Harder than I ever imagined.

My first pregnancy was a graduate level study of exhaustion. As one friend explained, I was working construction 24/7.  And that was before the baby was born.  But the physical demands of pregnancy and labor are nothing compared to the efforts of caring for a newborn, with little or no sleep in a body still reeling from childbirth. I did not write while my baby slept.  I used that time to shower – and nap.

Motherhood is hard, physical work involving barf, tears and excrement.  It requires good upper-body strength to lift the ever-growing child into its high chair as it becomes a toddler and requires even greater emotional stamina.  Parenting pushes human endurance to its limits.  The sentimental ideal of motherhood as an exalted state of delicate femininity – that mythical ideal that the greeting card companies and florists cash in on the second Sunday in May – is far from the mothering reality I experienced. It’s as if the world has agreed to deny that roses have thorns.

I’d like to see mothers portrayed as the Amazons of the world – strong, warrior women built to endure the physical challenges of breeding and trained to endure the marathon of raising a child to responsible independence – all within a culture that often only pays lip service to the task.

Professional athletes get million dollar contracts, white-collar workers have vacations, and even day-laborers get paid. Motherhood is a volunteer job.

I’ve been blessed with three healthy, intelligent, and interesting daughters.  I’m amazingly grateful to have had the chance to help raise them. They, in turn, have taught me patience, compassion, and love in ways I would probably never have known otherwise.

Beyond the personal satisfaction, however, motherhood is a contribution to the perpetuation of society, culture and civilization.  Mothers foster the future.

These are gifts enough.  I don’t want roses or chocolates, and I resent all the advertising that makes Mother’s Day into another consumer event.

Instead of obligatory adulation one day a year, I’d rather see real veneration of mothers – and fathers – for the hard, unpaid, unrecognized, patriotic and important work we do.  Rather than a sentimental greeting card on Mother’s Day, I’d like to see a constant celebration of parenting that includes – but is not limited to – public policies that promote the health, education and welfare of families.  I’d like a government that places a greater value on our children, and instead of sending them off to war, promotes diplomacy and does more to wage peace around the world.

This essay was broadcast on the stations of Vermont Public Radio on May 5, 2010. Since then, the plight of mothers and their children around the world has only gotten worse. You can listen to my outrage here.