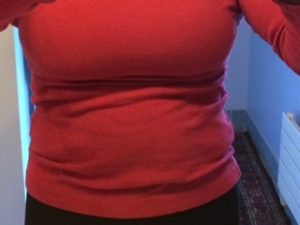 It’s easy for me to avoid the wrinkles, bumps and bulges of middle age by not looking in the mirror; it’s harder to avoid hearing loss, which is invisible.

I’ve known for a long time that hearing loss was in my future, and not just because I danced to Rock and Roll in the school gym beginning in junior high. I come from a family one soon-to-be-sister-in-law describes as “the shouting Luskins.” We all want to be heard; we’re not as good at listening to others, even with hearing intact.

I’m convinced that this is one of the reasons I became a writer; I learned at an early age that I’d have a better chance of being read than heard. It gives me more than a modicum of satisfaction to be a commentator on public radio.

But like the radio, hearing can be turned off. I know, because my father has serious hearing impairment that prompted him to retire at age sixty-five. That’s about the same time he inserted his first pair of hearing aids. They were a big disappointment because, as he says, “All they do is amplify the sound.” Nearly thirty years and several generations of devices later, that’s still his complaint.

It’s no use telling him, “That’s what they’re supposed to do.” He won’t listen.

LISTENING IS MORE THAN HEARING

Listening is at the crux of the problem. My theory is, like many people, he thought that once installed, the devices would restore his hearing to his pre-infantry days, when he was a teenager. But listening is not just a matter of hearing; it’s a complex combination of aural and visual cues.

After the war, my dad married, delegating all responsibilities for his social life to my mother. By the time he retired, she was his most effective hearing aid. Without her, he’s seriously hearing impaired.

Now that he’s come to live near me, I’m as frustrated by his hearing loss as he is. He has a computer, but at 92, he’s losing what little mastery of email he once had, and he’s never really caught on to using his caption telephone. Short of showing up at his senior residence and talking with him face-to-face, the only way I can communicate with him is by US mail.

Dad doesn’t use all the high-tech gadgets that pair with the nifty new hearing aids he received from the VA. I get it; I’m not always gracious about adapting to new technology, either. But I am thrilled to learn that advances in technology and neurobiology have turned up the volume on hearing aids. Thanks both to military induced hearing loss and all the aging boomers ahead of me, I’ll benefit when the time comes.

WHEN THE TIME COMES

How will I know when the time comes? My daughter thinks it’s already there.

“Mom, have you considered having your hearing tested?” she asked me the other day when she couldn’t get my attention.

“I’ve had my hearing tested,” I told her. I didn’t tell her it was more than ten years ago. At the risk of sounding like my father, the problem with the test is that my hearing is very good when I’m in a sound-proof room wearing noise-cancelling headphones, listening for beeps.

I have no trouble hearing when it’s quiet.

The problems are ambient noises, like water running while I’m doing the dishes, and a lack of visual cues, like when my husband says something from another room. I used to shout back, “I can’t hear you!” but that only encourages more shouting. I’ve finally found a use for the behavioral conditioning that was all the rage in Psych 101. Now, when someone shouts from another room, I just don’t answer and they come find me. I’m conditioning myself to do the same: find the person I want to talk to, and talk face-to-face.

One of the good things about my growing hearing impairment, in fact, is that it’s making me a better listener, one who practices “active listening.” As an active listener, I face the speaker, take in visual cues as well as the spoken words, and then paraphrase back what I’ve heard.

Yes, active listening slows me down: I can no longer multi-task while listening to someone tell me their story. But that’s not a bad thing. Besides, multi-tasking is overrated.

Other behavioral changes I’ve made include 1) avoiding noisy activities that make my ears hurt, like pot-luck suppers in echo-enhanced community halls; 2) taking a seat in a corner or against a wall in a restaurant; 3) rolling out my yoga mat at the front of the class; and 4) leaning in. I also wear ear protection when I vacuum and when I use the radial arm saw.

Mostly, I avoid noise, especially at work. When I’m my desk, I need quiet to hear the words in my head. 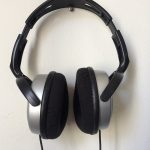 Check back for an essay every Wednesday, or subscribe and have them delivered weekly by email.