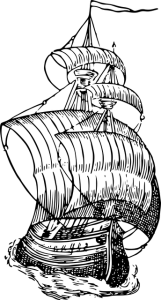 We all have immigration stories, and they all bear retelling. After all, there were only 102 passengers on the Mayflower and there are currently about three hundred and twenty-five million people currently living in the United States. We don’t all have ancestors who stepped off the boat at Plymouth Rock. Nor did the Pilgrims, as they called themselves, go through Immigration and Naturalization. The Pilgrims were displaced people.

First Nation people, who were already living in North America, don’t have immigration stories; theirs are stories of displacement, as are the stories of the Africans who arrived here as slaves. According the United Nations High Commissioner for Refugees, we’re now living in a time of unprecedented displacement worldwide, with over sixty-three million displaced persons; over twenty-one million refugees; and ten million people who are stateless. Almost thirty-four thousand people are forced to flee their homes daily.

By comparison, my family’s immigration story seems benign, though when I think about what it must have taken to leave a home and homeland carrying big hopes and small possessions, I come face-to-face with two realizations: First, my forebears must have found life in Europe so bad that uprooting themselves and risking everything seemed like a better alternative; and second, they must have had enormous courage to make the journey and set down new roots. 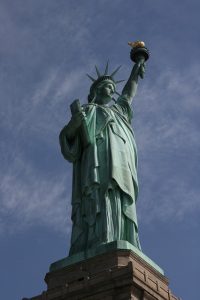 I first learned about the Pilgrims in 1963, when I was in second grade and Columbus’s discovery of America was still considered an unqualified success that logically led to eating turkey on the fourth Thursday in November. It would be years before I learned that the natives provided the first Thanksgiving dinner, and a few years more before I realized that my grandparents hadn’t been there.

Gradually, I became vaguely aware that my grandparents came to America on a boat that wasn’t the Mayflower and that they hadn’t come from England, but from a country that no longer existed. I was not sure how countries could disappear. As a seven year old, I still believed maps were drawn with permanent ink.

I knew that my grandparents and the Pilgrims were all old, but that three hundred years separated them was beyond my elementary reasoning.

My grandparents and the Pilgrims were all immigrants. That John Winthrop left behind landed wealth and my grandparents hand-carried their two silver candlesticks didn’t diminish the fact that they all abandoned their birth lands for America.

Like the Pilgrims, my grandparents sought religious freedom. That Puritanism and Judaism are different religions didn’t concern my second-grade mind. My focus was on the basics – like Palmer script.

We ate turkey and cranberry sauce and thought about the long-suffering Pilgrims in their tall hats and buckled boots (as we had been taught in school), but we were really celebrating the endurance of all Pilgrims, including my grandparents. My grandparents had ripped themselves up from European soil just before they would have been weeded out. They transplanted themselves like seedlings in clay pots, to small, Brooklyn apartments, with narrow windowsills, and they raised their children on pavement.

My grandparents survived the transatlantic passage and crossed the threshold of America at the immigration station on Ellis Island. They climbed the stairs into the Great Hall, where they stood for inspection by the six-second doctors in the glow of electric lights, which they had probably never seen before. Under the great, vaulted ceiling, they each waited in the hot press of travel-worn pilgrims—all hopeful, all stinking of excitement and fear.

My grandfather Jacob arrived in 1914. He sent the money he earned as a shoemaker to my grandmother and uncles, who joined him in 1921.

Both my parents were born in this country. They are Americans, but I think of them as pilgrims too, like all the rest. Their pilgrimages took them to ivy-covered halls and on to pioneering professional careers and a house in the suburbs, where they cultivated my three brothers and me.

The four of us have scattered across the continent, on pilgrimages of our own. And it’s this tradition of seeking freedom and meaning that we celebrate on this uniquely American holiday.

At Thanksgiving in my house, we eat turkey and salute my grandparents who stepped ashore on Ellis Island, my family’s Plymouth Rock. 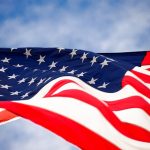 A version of this essay was broadcast on the stations of Vermont Public Radio on 11/22/2007. You can listen to the broadcast here.

Subscribe to receive an essay every Wednesday. Just enter your address in the box, click subscribe and check your email to confirm you’re a reader and not a robot. Thanks.