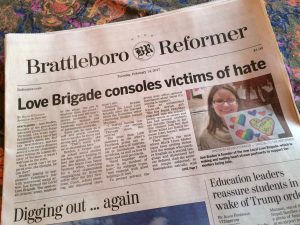 In the week following the election, the Southern Poverty Law Center documented more than 700 instances of “hateful harassment,” across the country, including in Vermont. Swastikas were scrawled on the door of Havurah House in Middlebury and on a Trump sign near Hillel House at the University of Vermont; and “F*** MUSLIMS#TRUMP2016” was written on a whiteboard outside a Middlebury College dorm room occupied by two Muslim students.

Instead of flowers and chocolate for people who already know I love them, I’m drawing hearts on postcards and sending messages of love to some of the people who have been victims of this kind of hate. First, I’m sending love to Vermonters who’ve been targeted in this nasty political climate where bigots have been emboldened to:

After sending Valentines to Vermonters who’ve been targeted, I’m sending hearts and love to others on the list published by the Local Love Brigade – Vermont.

I was astounded by this list, both by how long it is and because I’d not known of these events, even though I’ve tuned back into the news after a post-election blackout for my mental health. I learned that while I wasn’t paying attention

Fortunately, sending a postcard of love is easy. All you need is a 4 x 6 index card, some markers and a 34-cent stamp. We’re encouraged to post photos of our Love Brigade Postcards to Facebook and join the group. #LocalLoveBrigade  #Spread the love #LoveTrumpsHate

I’ll happily email you a short story to create change every week; just subscribe to this blog by entering your email address in the box at the right, then check your inbox to confirm that you’re a reader and not a robot.

You can also read my award-winning novel, Into the Wilderness, a love story relevant to our times. Into the Wilderness tells the story of Rose Mayer, a twice-widowed New York immigrant who’s also a union card carrying Democrat, and Percy Mendell, a dyed-in-the-wool Vermont Republican. The two meet in small town Vermont in 1964 and clash over national politics: LBJ, Barry Goldwater, and civil rights before finding common ground in music, aging, tomatoes, and love.