More To Say About Axes

Last week, I had Axes to Grind; this week, I have more to say about axes.

Even though I’d been using an ax for decades, it wasn’t until a few years ago at a course a course on Traditional Ax Skills that I learned all the names for the parts of an ax. 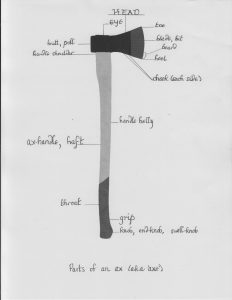 As a writer, I’m always interested in language, especially metaphorical language. I was charmed to learn that an ax has a head with cheeks, a heel, a toe, a beard and a butt. The handle has a belly and shaft, a throat, a grip and a knob.

That a tool as simple as an ax can have so many named parts, and so many of those names are also the names for parts of the human body, indicates to me the importance of this ancient tool in human life and maybe even affection borne of long association.

Certainly, axes have served as a household tool, an effective weapon, and as a ceremonial object.

There are many types of axes, each designed for a particular purpose. A bearded ax, for instance, was used for beheadings. Each particular ax has its own name; a partial list includes hatchet, felling ax, splitting ax, broad axe, splitting maul, pick-ax, ice-ax, slater’s axe, fire axe, double-bit ax, and tomahawk.

While it’s hard to imagine a tool more humble than an ax, it’s also hard to think of another such tool with so much rich language attached to it.

If you can think of other such tools, please share in the comments section below.

Receive an essay every Wednesday, by entering your address in the box, click subscribe and check your email to confirm you’re a reader and not a robot. Please subscribe! It’s easy! It’s free! And it’s an affirmation of my words! Thank you.