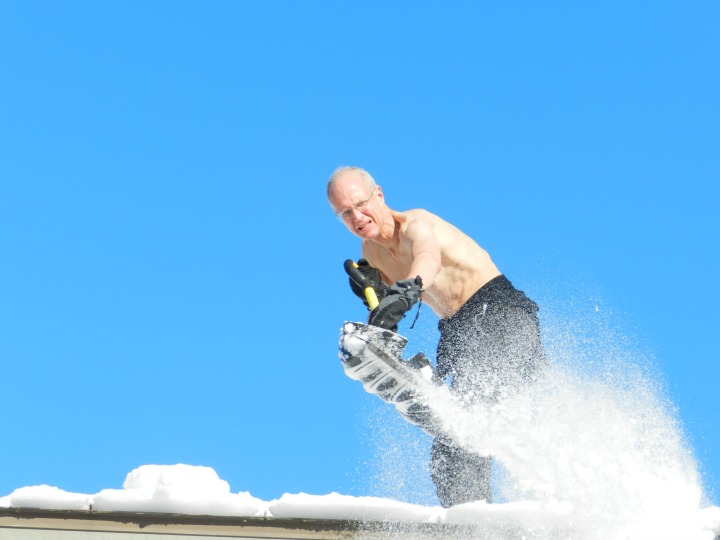 New England is famous for its weather, and this winter, we’re having plenty of it – so much, in fact, that we’ve had to shovel the roof. 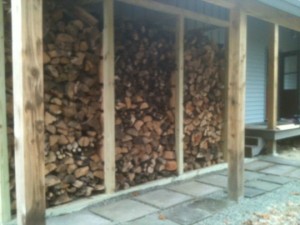 A few years ago, we had to replace the original roof on our house. It was of cedar shakes, which shed shingles but not snow. We replaced it with a standing seam metal roof, requiring us to reconfigure the entrances to the house.

A metal roof sheds snow with a whump! which buries whatever’s underneath, and it compacts on impact, making the snow too dense to move. So we made a covered entry to the back door, eliminating a great deal of shoveling and providing ample wood storage to boot. 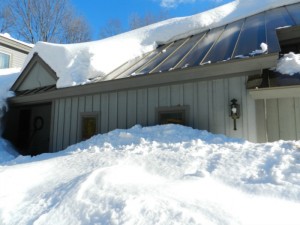 For the past two winters, the snow rumbled and thumped as it flew off the roof. But this winter started with a heavy, wet snow back in November, followed by freezing rain that plastered a substrata of ice onto the roof. This ice was like Velcro to which the subsequent four feet of lovely, light snow has stuck.

As long as everything was frozen, we were okay, but last Sunday we had a break in the weather, with the thermometer rising to a near tropical thirty-nine degrees. Things started to melt. Water backed up on the roof. Water dripped into the house. There was only one thing to do: climb onto the roof and shovel.

My husband; not me. 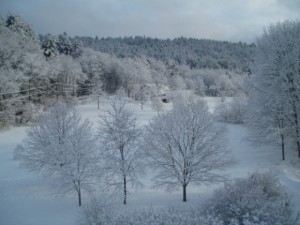 I’ve been up there. And yes, there’s a breathtaking view, but I’m too busy hyperventilating to enjoy it. Heights aren’t my thing. Instead, I’m stationed below, holding the ladder, fetching shovels, rakes, and the camera.

Meanwhile, my hero throws snow off the roof.

“We should have built the dormer from the ridgeline,” he says of the renovation we did when we reroofed.

He’s right, but it’s too late. Despite our best efforts to anticipate snow loads, we missed out on this pitch, and we’re stuck, shoveling the roof. 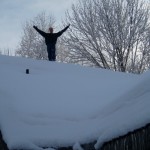 Deborah Lee Luskin is an author, blogger and pen-for hire who advances issues through narrative and tells stories to create change.