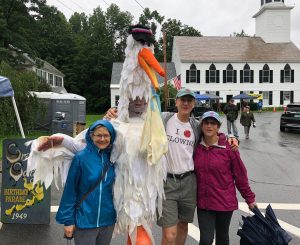 People are always talking about the weather, especially those of us who live and work rurally and spend part of every day outside, regardless.

Weather: in Vermont, we have lots of it. It’s a place where people say, “If you don’t like the weather, just wait five minutes and it will change.”

Sometimes, that’s true. And sometimes, we have sustained periods of rain and humidity or sub-zero cold, or glorious, high-pressure air.

Earlier this month, it rained for most of two weeks. At first, it was welcome. It had been so hot and dry the grass in the upper field crunched underfoot. We had to water the garden, the chickens, and ourselves. Keeping everything hydrated became a conscious and necessary task.

The rain arrived about the same time as my brother and sister-in-law from California, where even when drought conditions abate, not a lot of rain falls. Rain is mostly a winter event where they live. Winter there is when the hills turn green and the flowers bloom. The rest of the year, the landscape is fifty shades of brown with hints of greens that tilt toward gray.

My relatives were charmed by the rain: the sound of raindrops snapping against the leaves, plinking on the metal roof, hitting the stone patio, and hissing against the ground.

“It smells so fresh!” my sister-in-law kvelled. She’s a Californian born and bred, and each trip to Vermont is an exploration of weather she’s never before known, from the delights of waking up to snow frosting the landscape to the thick air of a summer night.

We didn’t let the rain stop us from attending the annual Grace Cottage Hospital Fair, or from my brother hamming it up in his guest appearance as the stork who led the Baby Parade. Nor did it stop others from attending and having fun. The fair is fund-raiser for Vermont’s smallest hospital, as well as possibly its best. Grace Cottage has been recognized as one of the top twenty Rural Critical Care Hospitals in the nation two years in a row, and recently named the Best Employer in the area.

But the gentle rain morphed into something harder and more humid after the Californians returned home. They missed the daily afternoon deluge, when the rain fell with such force it bounced. With it came the fireworks of lightning and the tympani of thunder.

The storms inspired awe, but we stalled under the weight of the 100% humidity that stalled over the region. Since it does no good to complain about the weather, I didn’t and won’t. Instead, we shut the doors and windows during the heat of the day and fired up the dehumidifiers. At night, we opened the windows, switched the dehumidifiers off and turned the fans on. We sipped tall drinks on the porch after dark and reminded ourselves daily, “This too shall pass.”

High pressure has finally pushed all the hot, heavy, water-logged further east, and we’ve entered the bittersweet days of August, where the green of the trees turn toward blue, the tomatoes blush red and the sunflowers burst yellow.

Daylight fades noticeably earlier; nights are deliciously cool, the crickets have started to sing their farewell. It’s a bittersweet moment as I turn to the canner and start to put up pickles, jams and tomatoes as the earth tilts, bringing new weather and seasons even as I remain here, Living in Place.