Walking Across the New Bridge

Last week, I took advantage of what was billed as a “once in a lifetime” opportunity by walking across the new bridge on Interstate 91 before it opened to northbound traffic.

Like everyone who travels Route 30 to and from Brattleboro, I’ve been watching construction of the new bridge over the West River for years.

Construction began in the fall of 2013, when interstate traffic moved onto the southbound bridge, and PCL Civil Constructors began dismantling the old northbound span, girder by girder. These two two-lane arch truss bridges have been spanning the West River since the late 1950’s, when the interstate was built. Once state-of-the-art, they’ve outlived their fifty-year lifespan and become functionally obsolete. Nevertheless, the old southbound bridge is still in service, carrying one-lane of traffic in each direction since the project began. On high volume days, traffic squeezes to a standstill, backing traffic up for miles. Occasionally, construction has required closing the interstate entirely.

Before the interstate was built, all traffic traveled through Brattleboro on the state highway. A friend who walked to school in those days remembers trucks thundering through town. Strip development now clusters around the exits at the north and south ends of downtown, where traffic can be stop-and-go. And when the train pulls into the station, traffic on Main Street comes to a halt.

Whether due to an accident on the highway, slippery weather, or construction, when the interstate closes, Brattleboro becomes seized by gridlock, the likes of which was never known before the interstate. Traffic of this magnitude is a twenty-first century invention.

Construction of A Bridge to Nature

Once the old northbound bridge was dismantled, the new construction seemed to take forever. Curious about why it was taking so long, I joined one of the regular public tours PCL offered each month.

It was an education in civil engineering and an introduction into the complexity of what has emerged as a simple-looking and elegant Bridge to Nature, as the project’s called.

The first year was spent below ground, digging and laying the foundations on either side of the river. The piers couldn’t go up until the tons of reinforced concreted laced with a corrosion inhibitor had cured. But a bitterly cold winter followed by high water slowed construction.

So it’s been almost four years now, that I’ve been watching the one thousand and thirty six-foot-long bridge take shape a hundred feet above the river. The road was built from each shore using balanced cantilever construction, and late last December, the two sides finally met.

On Saturday, March fourth, the Town of Brattleboro and PCL invited the public to walk across the bridge before it opened to northbound traffic. About 800 of us showed up for this once-in-a-lifetime chance, all eager to take in the view despite bone-chilling wind on a single-digit day.

Once in a Lifetime

Project manager, Caleb Linn, welcomed us to the guided walk, inviting us to talk with any one of the workers wearing safety green spaced at intervals along the yet unstriped roadway. Visitors huddled around a design engineer, a safety officer, a construction foreman, and several workers who had manned round-the-clock shifts asking questions and learning about the construction. One engineer pointed out the steel-toothed expansion plates, built to withstand temperatures from fifty-below to a hundred and thirty above. Another explained how the bridge will carry two lanes in each direction, but is actually wide enough for three.

The bitter wind kept my 92-year old dad from joining me, but there were lots of parents with children, including babes in arms. The bridge has a projected lifespan of more than a hundred years, so I can well imagine many people, for generations to come, bragging, “I know someone who walked that bridge.” 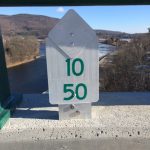 Opening the bridge to northbound traffic has been delayed, first by cold weather and then by a major snowstorm, preventing lane striping. The bridge will open once the paint can dry.

This essay combines two commentaries originally broadcast on the stations of Vermont Public Radio. I-91 Bridge aired 2/6/15 and Inspecting the Bridge on 3/13/17.