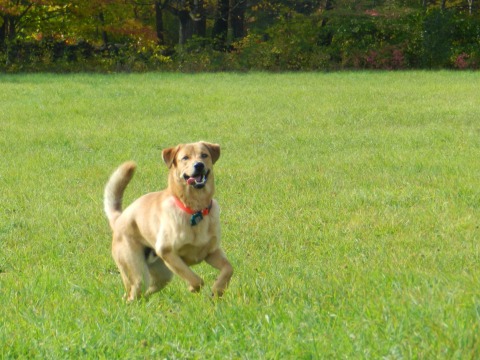 2014 was my year of the dog. We’d lost Bonnie, our canine companion, in August of 2013, and adopted Leo in January of 2014. During the five months we were without a dog, we also lost our bees to a bear, our flock to a fox, and our garden to deer. We needed a dog. 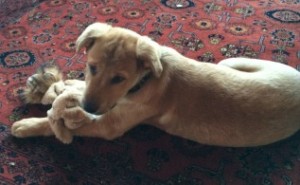 We found Leo, a mixed breed rescue from North Carolina, when he was a twelve-week old pudgy wiggle-worm as eager to please us and we were to love him. And what’s not to love in a puppy who slept through the night his first week at home, cheered us with his goof antics, and curled up under my desk while I worked?

This last trait was key.

I didn’t just need a dog to keep the wildlife a respectful distance from the farm, I also needed a canine companion. 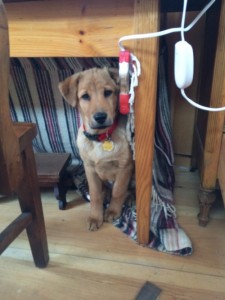 I spend the best part of the day alone, inhabiting the imaginary world of my fiction. To sustain it, I’m somewhat reluctant to leave it for the alternate universe of the so-called real world. To worsen matters, about the same time Bonnie died, my partner suffered severe overwork, often putting in fourteen- and fifteen-hour days. Solitude turned to loneliness as I kept the home fires burning (literally, since we heat with wood), brooded and knit.

Leo arrived and chased his toys, the cats, and my loneliness. 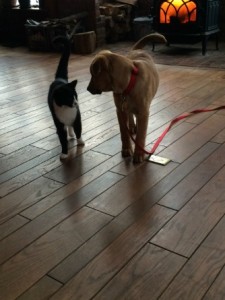 He came with me to work and holed up under my desk, where he alternately napped and chewed on my toes. I went with him to dog school, where I learned how to behave so he’d listen to me. Afternoons, we played ball, explored the fields and learned our boundaries: He marked the stone walls, respected the river, and stopped at the edge of the road. I learned the length of his attention span, which grew in direct proportion to the lengthening daylight. Nevertheless, I was impatient for him to join me on long walks.

In early spring, I tried walking Leo uphill to Sunset Lake – a favorite climb of mine. But it was an exercise in frustration for us both. I’d expected Leo to walk beside me for an hour and a half on a road bordered by woods filled with chipmunks and squirrels that he expected to chase. We turned around in mutual disgust.

Both my previous dogs had accompanied me on this walk and others like it, walks I scheduled into my days for the dogs’ exercise and my own mental health. I didn’t understand why Leo was so slow to catch on until we took him with us to the coast of Maine.

In new surroundings, I saw that Leo was still a puppy, and I realized that since both my previous dogs had lived so long, I’d forgotten the chewed shoes, the puddles on the floor, and the escapades of their long-ago puppy-hoods.

Those dogs both lived over fourteen years, which means I’m now middle aged, so I forgive myself for forgetting that it takes a while for a dog to learn his boundaries and settle into my routine. 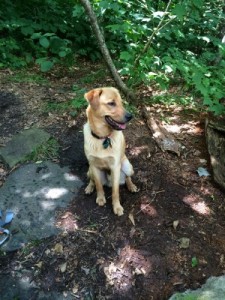 Now, at fifteen months, Leo is learning. He’s assumed responsibility for protecting his domain from interlopers, and he’s a great companion, even learning to take me for satisfying, narrative walks. He’s terrific in the woods, where he roams within my whistle as I hike on the blazed path, and he’s learning to heel when we share the dirt roads with occasional cars. In just over a year, I can now let him off leash so he can follow scents with abandon and passion, allowing me to wander along the path of my own narrative thoughts.