Yesterday, I committed a failure to fact check. A reader informs me that in yesterday’s post, I inaccurately stated, “Swastikas have defaced Jewish-affiliated buildings in Sarasota, Florida; in Esperance, New York; and Cincinnati, Ohio”. She’s absolutely correct that no “Jewish-affiliated” building was defaced in Esperance, NY in this incident.

In her email, my reader told me how much she enjoyed reading my novel, which inspired her to subscribe to my blog. But she now thinks she may have to unsubscribe. She invited me to respond to her email. I did.

Thank you so much for writing to me. I’m humbled by my gullibility and lack of fact-checking, and I’m so glad you’ve told me what really happened in Esperance. I have an obligation to get the facts right to the best of my ability. It’s so easy to believe what suits our opinions. And that’s one of the reasons I so value yours. If people of different beliefs and opinions can’t engage in civil discourse, there’s no hope for us. In fact, I think it is the breakdown of real conversation between people who differ that has created the significant divisions we’re now experiencing in our country. But as you know from Into The Wilderness, I believe that people with differences can find common ground. In fact, I think it’s critical that we do.

Because fostering dialog between people with difference is so important to me, I wish you would post your comments on the blog, for all readers to see and to stimulate the kind of respectful conversation that you’ve begun with me. I would also suggest that doing so would be more effective in promoting truth-telling than unsubscribing from the blog, which would just reinforce the silos we’re living in. We need more connection, I think; not less. 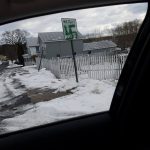 I’m also sorry for what happened in Esperance. That the swastikas were painted on businesses, a playground, private homes and a church, and not “Jewish-affiliated buildings” doesn’t make them any less offensive. According to the newspaper report I’ve now read, Deputy Mayor Kelly Shelffo instantly recognized the graffiti as a hate crime. It is no better to deny the power of that particular symbol or the vandalism of graffiti than it is to skip the fact-checking.

I’m also glad that the 13-year old who’s been apprehended says he drew them because they were easy to draw and not because he was targeting any particular group of people. But just as you’ve called me out on my ignorance, ignorance is no excuse for the crime.

Like you, I want to keep our country safe, starting with our communities. I’m quite active in Restorative Justice, and if this 13-year old boy lived in my county, he would undoubtedly be given the opportunity to participate in a restorative process rather than face criminal charges. He would have to take responsibility for his actions; get a chance to tell the story of why he did it; listen to the stories of the people who were adversely affected by his actions; and think of ways to repair the harm he’s caused to the community.

I’ve not read any reports about the “visiting far-left liberal” who you claim escalated the incident. You say this person “peacefully demonstrated;” the right to free speech and free assembly are constitutionally protected under the First Amendment. Even in the absence of the graffiti appearing on a “Jewish-affiliated building,” a swastika is a loaded symbol, regardless of how randomly it’s splashed around. Plenty of Christians suffered under the Nazis, whose appropriation of the symbol has tainted it. Kelly Shelffo recognized the power of the symbol. She’s quoted as saying, “To a lot of people this is a hate crime. It’s a symbol of hate and it was definitely done as a malicious act to make us fear like it was a hate crime.”

Once the state police were involved, the media and watch groups would inevitably learn about it, regardless of any visitor’s protest along the highway, and the FBI is routinely notified of hate crimes; it’s part of the law-and-order you and I both want.

I apologize again for not checking the facts. The swastikas in Esperance were not painted on Jewish-affiliated buildings. According to the public record as reported in newspapers and broadcasts, nine or ten (the accounts differ) swastikas were painted on a church, a playground, several businesses and private houses in the early morning hours of New Year’s Day. These are the facts that I’ve been able to collect from the best sources available to me. It is my opinion that it must have been a sad start to the year in Esperance, New York, and that the Deputy Mayor and the State Police are doing what is both legally and morally right. My hope is that if the 13-year old suspect is indeed the person who did it, he can take responsibility for his actions, repair the harm, learn from his mistakes, and become a loving member of his community.

Thank you for writing and for inviting me to reply to your comment.

I encourage all readers to comment as respectfully and sincerely as this reader did, regardless of how much you disagree. Comments invite dialog, and goodness knows we could use dialog after all the shouting and ranting and name-calling of late. So subscribe, read, respond. That’s the beauty of this format.